Time for African youth in science

This article authored by Drs. Mandingha Kosso Etoka-Beka and Ascel Samba-Louaka highlights the existing opportunities for Africans to fund their research and to network with other scientists!

Abstract: Africa is a continent with impressive human and natural resources. Astonishingly, its contribution to the current science is very limited. Here, after addressing impeding issues in research in Africa, we highlight some facts that will certainly encourage youth to engage in science and innovation. 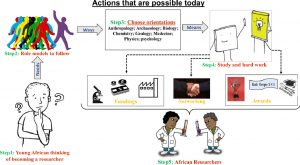 This article calls for the necessity to couple onsite scientific conferences coupled with an online attendance option for the sake of scientific inclusion.

Sickle cell disease patients are vulnerable to kidney illness according to a recent collaborative study from Ghana and USA.

Growing up in West Africa, it is common to know a family member or a neighbor with sickle cell disease (SCD) and unfortunately some of these friends, and family members died at a very young age. Unfortunately, SCD itself cannot be cured, only a treatment of the symptoms including the management of acute and chronic pain can be provided.

In a 2020 issue of Blood journal led by Dr. Ofori-Acquah, a Professor affiliated with Kwame Nkrumah University of Science and Technology in Ghana and the University of Pittsburgh in the United States, the authors found that high heme, a molecule derived from red blood cells, results in kidney damage in the condition of SCD due to the lack of a natural and biological heme binder called hemopexin. These discoveries suggest that extra precaution should be taken by SCD patients to prevent hemolytic conditions which can be caused during severe malaria infections.

Sickle cell disease (SCD) affects millions of people throughout the world and is particularly common among those whose ancestors came from sub-Saharan Africa. According to the Centers for Disease Control and Prevention (CDC), “SCD occurs among about 1 out of every 365 Black or African American births and alarmingly, 1 in 13 Black or African-American babies is born with sickle cell trait (SCT)” suggesting a genetic susceptibility of African descents on SCD.

Scientific progress has contributed to drop the SCD-related death among Black or African American children younger than 4 years of age by 42% from 1999 through 2002 in the United States coinciding with the introduction in 2000 of a vaccine that protects against invasive pneumococcal disease. This data suggested that environmental factors such as infection diseases represent a key factor in exacerbating the disease outcome.

Sixty five percent of people carrying sickle cell mutation live in in sub-Saharan Africa (west and central Africa). Unfortunately, sub-Saharan Africa is also the region where the prevalence of hemolytic infection diseases such as malaria is elevated. Resulting from the precedent elements cited in addition to the lack of adequate treatment, the childhood survival for SCD in Africa is 10% compared to a 99% and 94% in UK and USA respectively.

Therefore, it is critical to study and isolate the environmental factors involved in the severity of SCD. Dr. Ofori-Acquah and colleagues studied whether environmental factor which could result in heme increase through hemolysis could dramatically change the disease outcome of SCD patients.

It is known that the lysis of red blood cells, a phenomenon frequent in SCD patients, generates hemoglobin which can be converted to heme through biological process called “autooxidation to ferric hemoglobin”. In healthy person, the presence of heme in the blood is sequestered by a molecule called Hemopexin with the goal to prevent heme toxicity.

Dr. Ofori-Acquah and colleagues studies highlight a critical role of increase heme in blood in kidney injury. They found that SCD patients have a reduced heme-binder, hemopexin and in the context of increase heme in blood in SCD patients, the heme could be transported to kidney which provoke kidney damage instead of liver which is known to detoxify heme.

SCD disease severity results both from the interactions of gene and environment factors. While we cannot do too much in term of our gene fate, the recent study of Dr. Ofori-Acquah shows convincingly that avoiding extracellular heme rise is a protective mechanism against acute kidney injury in SCD patients.

In a real world, what can we do to prevent heme crisis in SCD patients:

Further pre-clinical studies and clinical studies should investigate whether hemopexin replacement could be used as a therapy to improve SCD outcomes as well as protecting SCD mice from acute kidney injury.

Online conferences: an alternative to on-site conference attendance? How does it affect our networking potential?

As a collective body of graduate students and postdocs, we can all agree that conference registration fees are expensive and there are no signs of a paradigm shift. I am still asking myself, why is this the case and will it ever change? So far, we have yet to mention the additional costs associated with attending a conference in person such as accommodation, flights, food, and ground transportation. The conference experience can be challenging and funding travel for trainees is often dictated by the training environment or situation. From a trainee perspective, traditional avenues for travel e.g. hotels or taxis are often expensive with hotel costs being as high as $250 for a single night that you may only spend 8 hours in. Often, trainees look for alternative and cost reducing approaches such as Airbnb and Uber/Lyft to name a few popular options (other alternatives may exist). All the above is trying to highlight that conference travel cost does not stop at registration. Yet, trainees appreciate the importance of gaining conference experience as it is critical for their career development. However, it comes at a financial cost.

Therefore, in the coming years, I will not be surprised to see more graduate students and postdocs opt for attending conferences online through a live stream channel, instead of a traditional on-site attendance. Similar to webinars, live streaming only requires a computer and can be done from the comforts of your own desk, sofa, or, city. Therefore, this approach can be convenient in term of cost. Registration expenses is often cheaper, and this excludes any additional discount costs for being a trainee. However, despite the apparent cost saving benefits, are we sacrificing an essential part of conferences – networking? How may attending conferences via live streaming affect our ability to meet our peers or future collaborators? Below are a few next steps on how to get started in the online world of conferences, followed by a few tips to help tailor your networking approach to an online platform.

Step 1: Check your availability to attend.

If yes, ask the organizers to confirm that the relevant sessions to your interests and research are available as a live stream option.

Upon registering, make sure you reserve sufficient time on your calendar to attend your preferred sessions. With the flexibility of where we choose to attend the conference from, completing lab tasks between sessions maybe convenient, however; it is still important to engage in the conference. I believe many of us do well at prioritizing lab tasks as these are often checkable and defined goals, but when attending an online conference, it may be worth considering having an accountability system setup to make sure we keep to our conference goals.

How can we network from these type of events?

Networking tip 1: Identify several presenters with whom you would like to interact and network.

Networking tip 2: Engage conversation with peers and colleagues: do not hesitate to ask questions virtually. If this does not exist in real time, follow up with the presenter shortly afterwards (24 h maximum) by emailing the presenter and ask them about a specific question. Referencing the session you attended virtually may help initiate the conversation, followed by your question to engage conversation.

Networking tip 3: Leverage the physical attendance of other individuals from your institution to gain a different perspective and help initiate a discussion on topics you both have learned from the conference.

Networking tip 4: Engage on the conference social media platform. This may help you connect and interact with other attendees. Twitter often has a large social media presence during conferences therefore, it can be a useful tool to keep up to speed with conference activities and connect with other professional. Physical location does not prevent you from interacting with the virtual world. Consider designating calendar time at the end of the day, maybe 30 – 60 minutes to cover all the potential social activities you might have missed. Following the societies twitter feed on social media can be an easy way to catch up with all the important information.

Let’s teach our children science in their own languages